Paraguay trips have much to offer. The country is sparsely populated and a true off-the-beaten-track location in the centre of South America. It is an unspoilt and amazing holiday destination – a trip here is to step back in time among an incredible variety of attractions.

For the culture seeker, the country has a history full of upheaval and suffering due to the historic wars with its neighbours and its population decimated. The Jesuits left their mark in incredible mission towns, and immigration from Europe, in particular, influenced the country too. In the early 20th century, Mennonite immigrants settled in the north of the country creating their own closed communities. Many immigrant communities mixed with the native Guarani peoples creating a cultural melting pot that can be enjoyed nowadays in our Paraguay trips. Guarani and Spanish are the official languages of the country.

Paraguay holidays can also offer much to the nature enthusiast. The Chaco is a semi-arid wilderness and one of the least densely populated places in South America. Covering the north of the country, there is an abundance of fauna including puma, tapir, giant armadillo and anteater. The north-eastern part is a wetland which forms part of the Pantanal ecosystem in Brazil. The south-east corner is in the Alto Parana, an area of national parks and amazing waterfalls. This area is close to the Iguazu Falls so a Paraguay holiday can be combined with Argentina and Brazil.

The Golden Circuit is a series of colonial towns around the capital Asuncion. This includes towns such as Aregua and its artisan market, as well as the baroque church of Yaguarón.

The Jesuit reductions in the south of the country, established in the 17th and 18th centuries, are historical museums. The Jesuit Missions of La Santísima Trinidad de Paraná and Jesús de Tavarangue should be part of any Paraguay trip.

The Mennonite town of Fiiladelfia offers and incredible insight into the lives and culture of their communities. It is also a great base from which to explore the Chaco. The Pantanal, in the eastern Chaco, is a remote wilderness bustling with flora and fauna waiting to be explored. The Saltos de Monday waterfalls reach a height of 45 metres and a width of over 120 metres. They are located near Ciudad del Este on the border close to the Iguazu falls. The Itaipu dam is also a man-made wonder to be visited in this area.

More on Paraguay holidays and trips

Paraguay, being at the “heart” of South America, can also be combined neatly with the neighbouring countries. It is a fascinating destination with a tragic history, an incredible assimilation of the original peoples. An opportunity to visit untouched places by the influences of mass tourism.

Discover our Paraguay trips on this page.

Below you will find a few of the many attractions Paraguay has to offer for your holiday.

The Alto Parana region is to the east of Paraguay and its main city is Ciudad del Este on the shore of the Parana River.

Across the Parana River is where you will find Foz do Iguaçu in Brazil and the Iguaçu Falls.

The Itaipu dam – one of the largest of the world – can be visited and just South of Ciudad del Este the Monday falls are worth a visit.

The Tati Yupi Biological reserve offers the outdoors enthusiast interpretative trails of the wildlife and fauna as well as bike trails for the more energetic. 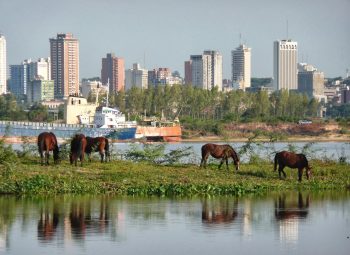 Asuncion is the capital of landlocked Paraguay and sits on the shore of the Paraguay River.

Asuncion is one of the oldest cities in South America and its character reflects the harsh and varied history of the region.

It also represents the diverse nature of Paraguay where Spanish and Guiarani – the indigenous language – are the official languages.

Places to visit include the National Pantheon of Heroes and the Independence House Museum.

A guided tour is recommended, to help you get the most out of your visit.

View all Places of Interest

Can’t find what you’re looking for? Get in Touch