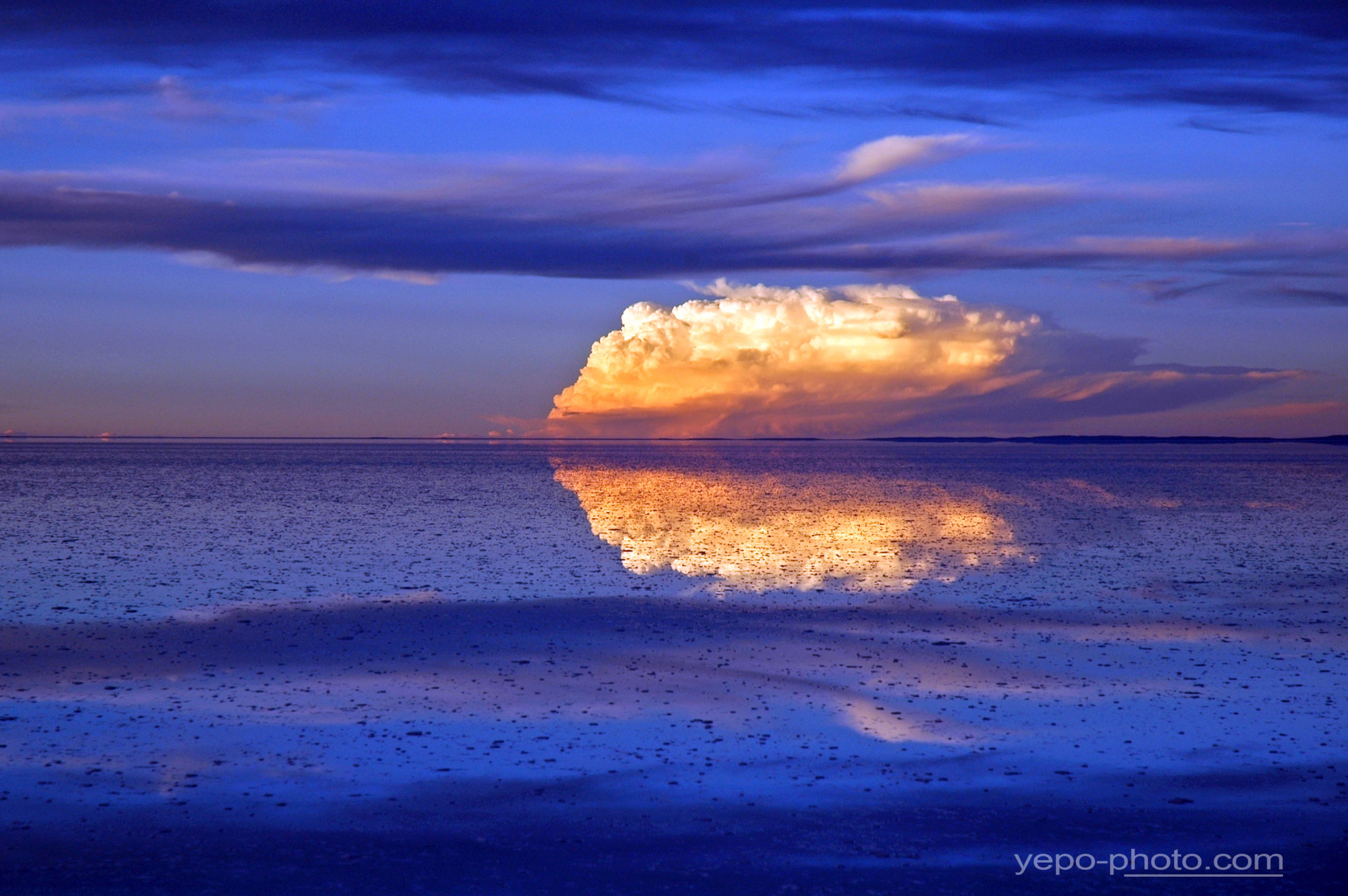 Bolivia’s Salar de Uyuni has inspired travellers for decades – read our travel expert’s guide to a day and night on these magnificent salt flats.

I woke around 5.30am, put on my down jacket and left the (relative) warmth of my salt hotel to walk down to watch the coldest sunrise of my life with a flamboyance of flamingos.

Having slept well on a bed made of salt in a room made of salt bricks with a salty floor, which was surprisingly soft to the touch, I was amazed to see the flamingos already starting to become active after a very, very cold night.

That anything has survived in such a testing environment is testament to the will of life.

After breakfast, you get into your 4×4 (space for 4-6 people) and drive over a variety of terrains.

Most days involve 60-90mins of driving followed by a 30-40 minute visit. Top-end tours have new and comfy vehicles, budget tour cars can be more worn and basic – with a lot of drive time, a comfortable car is paramount.

In the dry season (April to November), the salt flats offer a terrain of crazy patterns and the chance to take trick-of-the-eye photos.

In the wet season (Dec-Mar), the flats can flood, helping to create what’s been described as the world’s largest mirror, a flat and reflective pool stretching for miles.

Vehicle on the salt flats

It’s not just salt – there are villages to visit as well as small islands, replete with cacti, such as Inca Huasi – and keep an eye out for flamingos, vizcacha, foxes and more.

Another major pull are the lagoons (green, red and more), coloured via metals and microbes that live there.

Not all the driving is on salt, either. There are red desert sand routes, as you speed among Dali-esque rock sculptures while under the gaze of giant volcanoes like Licancabur.

By the afternoon, your driver and guide get you to your hotel to settle in, ready for a local dinner and then the chance to star gaze at night.

Stepping out after sunset and dinner into clear skies, you will feel part of the cosmos, completely among the stars. There is no light pollution here and the moon will look like a small marble, waiting for you to pluck it from the dark velvet night.

In Uyuni, at night I felt as much a part of the clear skies as a terrestrial being.

So, yes, it’s cold, yes it’s high and yes you spend a fair bit of time in a 4×4, driving around, but the Uyuni Salt Flats will surely steal your heart once you step into this otherworldly environment.

All terrain in Uyuni

Practical information – at a glance

We use community-owned and run hotels and it is a real privilege to be hosted by people in these remote communities.

The hotels are built of local materials, salt or stone, and are designed to be as ecological as possible in this fragile environment. All rooms have a private bathroom with solar hot water and heating.

This is one of the poorest parts of Bolivia where there is a problem of depopulation as local Aymara communities really struggle to survive. The hotels are on land rented from the communities and will be passed entirely into community hands in 15 years.

What to wear in Uyuni

You need everything from plenty of warm clothes to deal with way below freezing temperatures and super strong sun cream to protect you from a fiercely strong daytime sun.

For the cold: Hats, gloves, down jacket, thermals, windproof jackets and several layers of clothes are vital, as are decent shoes to help keep extremities warm, plus lip balm.

For the sun: Very high factor sun cream/block for face and lips, hat, high UV protection sun glasses, bandana for neck, long-sleeved t-shirts and trousers to protect your body from the sun’s rays.

Getting to the Salt Flats

Most people will access the salt flats via the town of Uyuni, which has a famous train cemetery to visit and well worth a look.

From La Paz, there is a one-hour direct flight to Uyuni, an overnight bus (10 hours) or a bus and train combination (12 hours). There are also buses (4 hours) from Potosi.

The other main entry point is crossing into Bolivia from Chile’s San Pedro de Atacama. This Bolivia trekking highlights tour takes in the best places to visit in this beautiful Andean country. Visit all the travel highlights, including La Paz, the Salar de Uyuni salt flats and Lake Titicaca. Now well acclimatised to Bolivia’s high altitude, top it all of with and a fantastic hike… More on Bolivia Highlights tour You start your trip in the city of Santa Cruz (or alternatively you can start in La Paz) then head to the beautiful colonial city of Sucre. In Sucre you visit nearby indigenous markets, and can shop for stunning traditional weavings. From Sucre we continue… Our trip was fantastic, the highlight was a tie between Machu Picchu and the salt flats. Both of those places were unreal. The accommodations were great, the food was great, and the overall organization was awesome. We were so happy with the way everything worked out, and so grateful to you for making our ambitious agenda a reality! Our salt flat guide and driver were amazing, and we really enjoyed spending time with them. Thank you so much for helping us plan everything. You were so delightful to work with, and we were so impressed that you were able to get this adventure together so quickly for us! We will be recommending Andean Trails to our friends/family, and hope to travel with you guys again in the future.

The Uyuni tour - even though we weren't able to visit the National Park due to snow, it surpassed our expectations with its amazing, spectacular landscapes. We had a great guide (having an English-speaking guide was well worth the extra cost - thanks for the steer).

Everywhere was friendly, welcoming and well-located, and in fairness did have hot water which was very welcome! We loved the lodge at Chalalan. Other than the cold rooms, the Tayka Salt Flats tour lodges were spectacular.

The guides were top notch. Informative, personable, organised and punctual, and clearly put in the effort to give us an outstanding experience, including the revised itinerary in Uyuni where we felt that our guide, Alvaro, really stepped up to minimise the impact of the National Park closure and give us a great time.

Chalalan explained how they are benefitting the local community and it was gratifying to see the contribution it makes.

The arrangement by which Tayka hotels transfer into community hands also seemed like a good model.

Generally, we were told often that Bolivia feels a bit off the tourist map and that the country would benefit by visitors spreading the word.

Bolivia is a lovely, diverse and, in places, spectacular country. It's also one of the rougher countries we've visited, given the altitude, extremes of temperatures, road conditions, limitations of accommodation and general level of development, and this reflects in some of our comments above. Our trip itself was really enjoyable and fascinating and we'd like to thank you for your help in putting in together.