The majesty of Southern Patagonia can be experienced along the trekking trails of the Glaciares National Park in Argentina, infront of the impressive Perito Moreno Glacier, under the granite spires of Chile’s Torres del Paine National Park and driving across enigmatic Tierra del Fuego. This can all be experienced on Andean Trails fully escorted small group Patagonia Highlights trekking tour.

Here is Alan’s summary of his Patagonia Highlights experience:

I landed in El Calafate mid afternoon and once  I had collected my luggage I quickly spotted the guide holding a board that had my name  on it. I was soon being whisked to the hostel along with fellow passengers who had arrived on the same flight.

I had booked the hostel option which meant  that in the towns I would be sharing mixed dorms (up to 8 people in bunk beds)  plus a same sex tent share whilst camping. As a solo traveller this was the most economical option.

If I had been travelling with a partner or friend, a private double/twin room in the towns would not have been much more expensive. The single option was a fair bit more.

We were a group of 16 of mixed ages and nationalities. English was the common language and this was to be the start of new friendships. One thing everyone had in common was a love of the outdoors. Our first meeting was dinner that evening.

The next day we set off on the 3.5-hour drive to El Chalten, the gateway to the trails into Los Glaciares National park. We had already sorted out our gear for the next few days as we were to carry our personal belongings for 2 days and leave the rest in storage in El Chalten.

As we had a tour leader and a local guide, the different paces of the members of our group were well taken care of as one led the way whilst the other took up the rear. The weather was good, no wind and the sun would break through the cloud cover every now and again. After a reasonably easy 3-hour trek we reached our campsite.

In the Glaciares National Park there are no roads and the only pack animals permitted are llamas. This means that the campsite has no running water and the WC is latrine style. However, the campsite was already set up when we arrived.

Good-sized tents as well as sleeping bags with liners are part of the service. There was also a dining dome and a separate kitchen tent. We were soon sitting down to a hearty meal and the vegetarians amongst us were also well catered for, and wine and beer were also available for purchase.

The next morning we woke up and there was a thin layer of snow covering the campsite.

Snow around the dining tent

We then headed off to Laguna de Los Tres at the base of the Fitzroy Granite Tower. It was a good climb, but the weather conditions (snow) conspired against us and the famous granite rock was nowhere to be seen.

The next day we set off for Laguna Torre, looking out for the pinnacle-shaped mountain and the Torre Glacier. The sky was blue and the conditions glorious.

On the current itinerary you return to Chalten this day and then the following day set off on a day trek to the Loma de Pliegue Tumbado and if the conditions are favourable will be treated to spectacular views of the surrounding countryside.

Then it was back to El Calafate for a couple of nights and a shared tour to the magnificent Perito Moreno Glacier. It is touristy, but for a reason. It is well worth spending the extra money to do the optional boat trip.

We were then off to Chile and the Torres del Paine National Park. We set off in our own vehicle for the 5.5-hour drive. After about 4 hours we were at the Argentine border post, formalities taken care of and soon at the Chilean one. Here there was also a shop, exchange facilities and a restaurant where we had lunch.

We were soon settled into our campsite in the Torres area of the park. Here we also had running water, hot showers and flushing toilets and the food was equally as good.

In the early morning we set off on the 8-hour round trip to the base of the Towers and the conditions were on our side. Sunshine and a slight breeze made for a thoroughly enjoyable day. The packed lunch after a 40-minute moraine climb with spectacular views at the base of the Towers was the best of the whole trip.

The next day we headed to Puerto Pudeto, took a ferry across the blue waters of Lake Pehoe to Refugio Paine Grande, where our next camp was. We left our gear at the campsite and then headed off for the French Valley. This was a hard day. The wind was up, the rain was sideways and the clouds were low. There were some great “whirlpools” spotted on the lake, however.

We saw the French Glacier. Dinner that night was in the Refugio and an enjoyable time was had later in the bar as the clouds had now cleared and there were great views of the Horns of Paine.

Our last day in the park was spent trekking to the Grey Glacier viewpoint and was a fitting end with brilliant sunshine.

That evening we sailed back across Lake Pehoe and drove to Puerto Natales, a small and friendly town on the Last Hope Sound.

In the morning we set off to the end of the World and the Beagle Channel in Tierra del Fuego.

It was to be a long drive, across Patagonia steppe, a ferry crossing the Magellan Straits accompanied by jumping dolphins and then from North to South on Tierra del Fuego with much hanging about at the Chile/Argentina border. The drive was worth it though and we finished up on a small estancia, sleeping in the bunkhouse and treated to a typical Patagonian barbecue.

It was then on to Ushuaia, the southernmost city in the world and a visit to the Tierra del Fuego National Park and a sail on the iconic Beagle Channel.

Andean Trails’ Patagonia Highlights operates with guaranteed departures every Saturday from the end of October to the end of February. Get in touch for more details. More on Patagonia lodge-based hiking trips There is a special emphasis placed on the natural history of the region and helping you to discover the best of Patagonia’s beauty. We walk to beautiful lookouts, waterfalls and white-blue glaciers that calve into pristine lakes. We take you to the heart of… More on Patagonia trekking eco-tours. The holiday starts with a full-day trip to Perito Moreno Glacier. Next, Fitzroy, where our extended hiking adventure sees complete the Fitz Roy M then walk on glaciers, see the Chile and Argentina border, cross lakes, and even bike from our eco-camp. In Argentina, we… 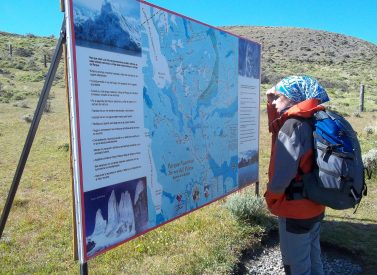 More on self-guided Patagonia W trek In Fitz Roy National Park, trek to the foot of Mount Fitz Roy, Cerro Torre glacier and the Pliegue Tumbado viewpoint, or Lago Viedma. Paine is a mix of dramatic scenery, beautiful forests and huge lakes, and our Paine W takes you up close…

5 ***** It was very memorable - reaching the lakeside at Torre del Paine after the trek through the valley; exhausted but exhilarating. The small group bred a camaraderie that added to the wealth of experiences. The hotels were a level below what we might have chosen for ourselves but we could never haver reached such locations or enjoyed ourselves so much if not for the group experience.

We had a wonderful, memorable trip and Patagonia was spectacular - many thanks for your organisation and suggestions, everything went according to plan and it really was trouble-free travelling.
Read more